Our first blogger is Amanda of Too Tall Fritz! She was nominated by me, because she was one of the first running bloggers I ever met (through our local club) and she is incredibly inspiring, managing a full-time job, commute, 2 kids, husband, pets ... and finding the time to do Cross Fit and train for 4 marathons in 21 days to celebrate turning 40. 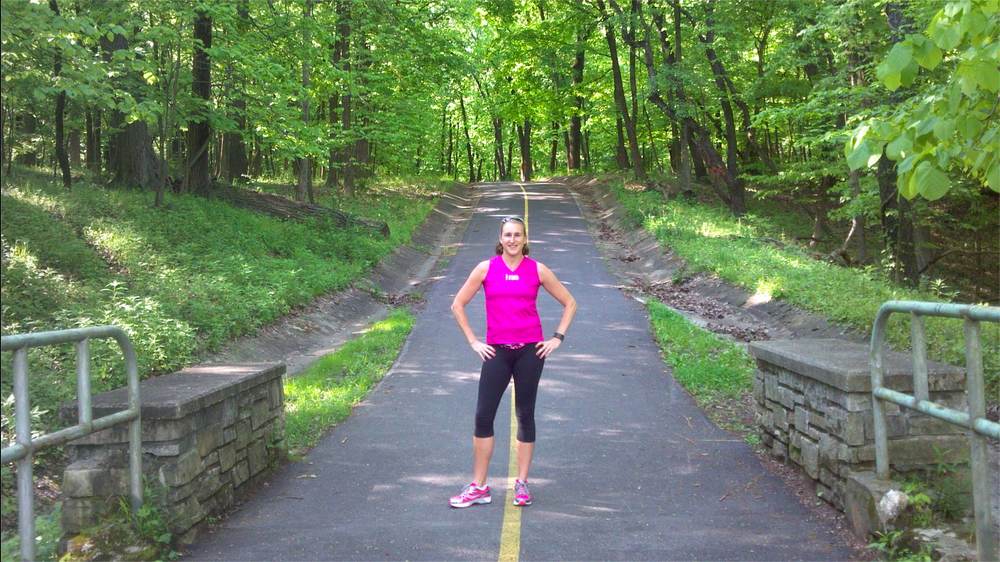 How long have you been blogging? Why did you start?
I started blogging after the 2011 Chicago Marathon because I wanted to TALK ABOUT running! I started a site where I could talk about running as much as I wanted and actually have an audience that might enjoy hearing about it.  I also wanted a place to store answers to the run questions that I was frequently answering.  I figured if I had a blog, I could write about it once and then just send out the link at a later date to anyone new who needed the information.  Funny thing, nobody really asks me questions anymore!  LOL!

How long have you been running? Why did you start?
I was a sprinter (and high jumper) in high school and college.  Then I took a hiatus post undergrad as I was juggling grad school and working fulltime.  Met my hubby, spent a couple more years on the baby/honeymoon AND THEN I stepped on the scale and said, HOLY SHxx!  I put on an old pair of running shoes the very next morning and just ran.  That was in 2004 and my first run was 1.4 miles.  My only goal since that time is to keep moving, no matter what.  It took me a long time to learn to love this "distance running" thing but I think I've finally found my groove.  Of course, Mr. Michael [son] helped with that when he arrived in 2009.  He was a screamer.  Still is a screamer. Sometimes the only peace I get is when I run.  And you know what?  I really love to run now.

How many races have you done? What distances?
I've only [editor's note: only?] been road racing since 2005.  According to Athlinks, I've done 90 races but I know some of what I've done doesn't show up on Athlinks. According to their records:

What's your favorite race?
It's no secret that I love the Shamrock Shuffle 8K in Chicago.  This is an amazing race and a HUGE atmosphere with over 1 million spectators.  It's a practice run for the organizers of the Chicago Marathon so I like to get a sneak peak of the changes that will be made on marathon day. 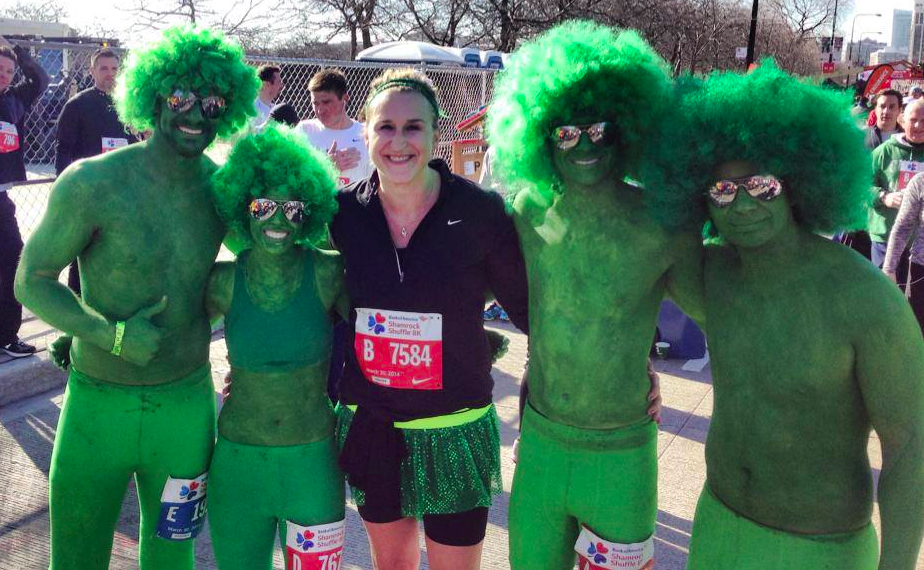 What was your first race?
My first race was the Chicago Big 10K in 2005.  It was horrible.  I think it was mid July and temps HAD TO BE 100 degrees.  I ran the first mile WAY too fast trying to get around the slow starters. Then I died.  Had to walk.  And I remember having a horrible headache from the heat.  It was not my finest hour.  I still don't do great in the heat.

What was your best race? Your worst?
I'm still waiting on my best race!  My worst could have been this year at the IL Marathon.  I was toasted emotionally and physically.  Or the worst could have been last year at the Great Illini Challenge 70.3 where it was so hot that my bike tires (and run shoes!!) stuck to the melted tar.  Temps were over 100 degrees when I finished.  It took me forever, just like the IL Marathon.  Both of these races were in Central IL in unseasonably warm temps.  Coincidence?  I think not.

What do you do when you're not running or blogging?
Work, commute (up to 3.5 hours daily!) and take care of the family.  Not much time for anything else but I do enjoy going out to dinner on occasion and I love being around the water and out on the boat.

What other active/fitness things do you like to do?
Bike, Swim, CrossFit AND I play with the kiddos which is usually way more exhausting than any actual fitness activities.

Where do you live?
Monee, IL now but moving to Ft Wayne, IN soon! 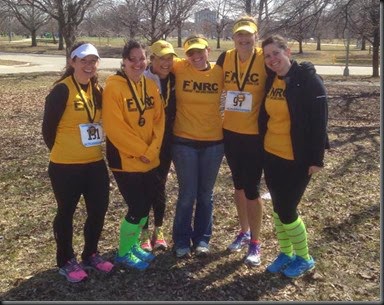 When did you feel like a "real" runner? Or, when did you start enjoying running?
It took me years to start enjoying the run. Things started improving when I learned about nutrition and recovery and I could actually recover from a run rather than feel like a truck ran over me for a week. When I started running long, there weren't a million bloggers (or internet sites) to help me! There was a big learning curve but I made it!

As to my feeling like a real runner, that's tough too.  It took a long time. I ran my first 3 or 4 marathons well before I started feeling like a real runner.  I think the switch flipped for me when I started meeting more and more runners.  Confidence is an issue for so many and I pretty much took up the role as the back-of-the-pack cheerleader.  How could I make those people feel like REAL runners if I didn't feel like a real runner myself?  Sometimes when we need to fill a certain roll it's necessary to change the way that we think on a personal level.  Or as my friend Bridgett says, "Fake it til you make it."

Where is your favorite place to run?
I really like running in Schubert Woods in Park Forest.  It's such a hidden gem.  The  main loop goes 4 miles so it's a great run for myself and Aby [daughter], plus there are a few hills, it's mostly shaded and there are several super cool bridges.  I love bridges, especially old ones, and Shubert Woods has plenty!

How do you like to refuel after a hard run or race?
I have my Post Workout Recovery drink within 30-60 minutes after I run, then I don't have to worry about counting carbs and proteins and trying to get the ratio correct.  But I do like a cold beer if that's an option.  Corona Light is my favorite!

Favorite piece of running gear?
At this point, it's my Injinji toe socks.  They have done wonders for my feet!  I don't blister anymore and I lose fewer toenails.  Big win!!

What's on your running bucket list?
I've always wanted to run the Cherry Blossom 10 Miler in DC. That's probably my old bucket list run because I am in love with flowering trees and it just sounds magical!  I have a "few" marathons on the list but the kids are at an age where I don't like to leave them for too long or too often.  So I mostly stay local or take them with me!  I do like to be able to do at least one destination race each year or at least that's the goal.  So many races, so little time!

How do you stay motivated?
Motivation comes from within.  I don't make myself a slave to training plans or schedules so it's a lot easier for me because I actually WANT TO run and workout.  I like it.  It really does give me a bit of sanity in a sometimes insane world.   Plus I'm not scared of downtime.  I'm more scared of injury than a slow race.  I'd rather run slower and KEEP RUNNING than be injured and on the couch for 2 or 3 months.

What's your #1 piece of advice for new runners?
Stop telling everyone that you're "so slow."  First, you probably aren't that slow.  Second, nobody cares.  Third, we are just happy to have another person jump on our crazy running train! Woo hoo, WELCOME!!

What is the running accomplishment you are most proud of?
I just ran 4 marathons in 21 days in the month of April (2014).  Something I wouldn't have even believed to be possible a year ago.  Every year my definition of "possible" changes.  I'm not afraid to fail so that makes it easier to get up the courage to try something new.  Something which may seem a bit impossible to most.  I'll never know what I can do if I don't try.  I know that I won't always be able to accomplish my goals but that doesn't mean I won't keep trying. We define our own reality.  I choose to try verses sitting back and wondering "what if?" 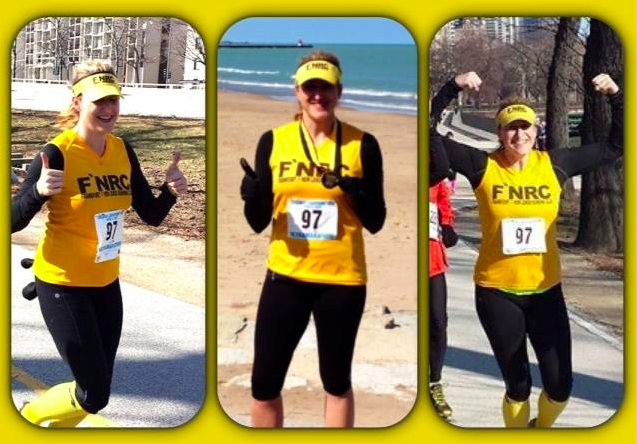 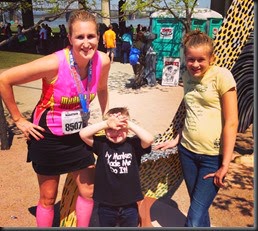 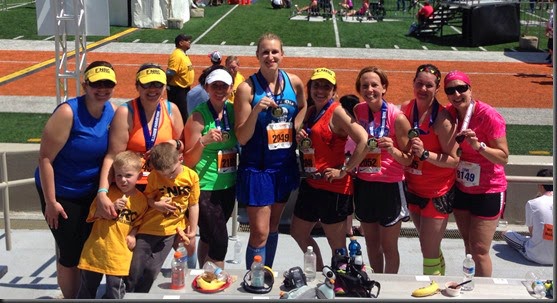 
What is your non-running accomplishment that you are most proud of?
Being a mom. It's not an easy title to carry and it's an even harder job to implement.  It's all consuming and quitting isn't an option.  I can't say that I'm great at it.   I'm definitely not perfect.  I want to be better.  I want to be stronger.  I want to be more patient.  I want to be a good example.  Each and every day I get up and do what I do because I'm a mom.  I know I would not be where I am today without my two little "monsters."   For that, I thank them, even though they frequently drive me crazy.

Who is your favorite running partner?
My daugther Aby.  She complains A LOT but I cherish our time together and know that it won't last forever.  She wants to run her first half marathon next summer at the age of 13.  This momma is proud. 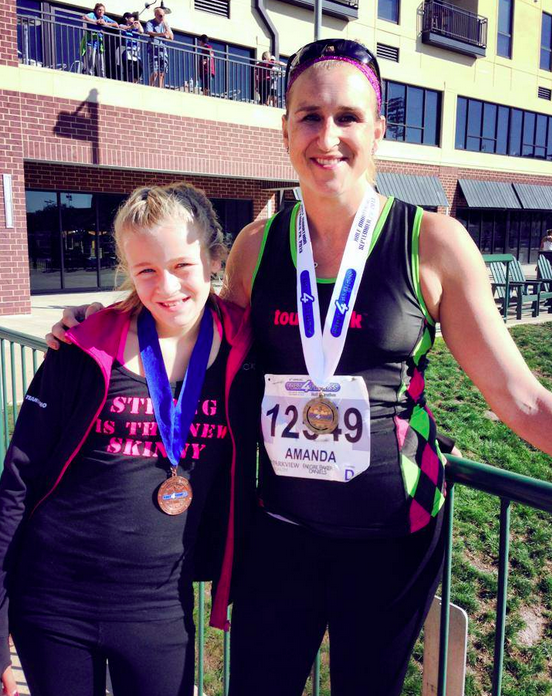 Read more from Amanda at TooTallFritz.com!